A new era of discovery in particle physics has opened in November 2009 with the start-up of the Large Hadron Collider (LHC) at CERN, the European Organization for Nuclear Research, in Geneva, Switzerland. The LHC, a circular proton-proton synchrotron, will operate at the highest energies any particle accelerator has ever achieved. The International Linear Collider will explore the same energy range using a different approach. By colliding electrons with positrons, the International Linear Collider would provide results with extraordinary precision, enabling the exploration of unknown regions of science – the "Terascale", so named after energies approaching Tera –electronvolts (trillions of electronvolts or TeV). 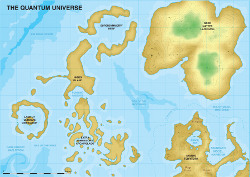 Based on experiments and discoveries over the last decades, physicists believe that the Terascale will yield evidence for entirely new forms of matters, and possibly even extra dimensions of space. This new matter includes the Higgs particle, as well as the possibility of an extended family of elementary 'superparticles', the heavier cousins of the particles we already know. On 4 July 2012, the ATLAS and CMS experiments presented their results in the search for the long-sought Higgs particle at CERN’s Large Hadron Collider. Both experiments observe a new particle with a mass of 125 GeV and “Higgs-like” properties. As the evidence grows, we are beginning to uncover the new physics territory being opened up by the LHC. These discoveries will tell us about the nature of the universe and how the laws of physics came to be.

The great precision of its electron-positron collisions would allow the ILC to act as a telescope to explore energies far beyond those that any accelerator could ever directly achieve.

For now, though, our view is obscure by a lack of knowledge of Terascale physics. Data from ILC would bring the Terascale into focus and give us a telescope to the beyond. The ILC would provide a view of energies trillion times beyond its own – into the ultrahigh-energy realm where nature's force might become unified.

Home » Why do we need the ILC?