A revolution has begun in the way we see the universe

In the past century, physicists have explored smaller and smaller scales, cataloguing and understanding the fundamental components of the universe, trying to explain the origin of mass and probing the theory of extra dimensions. And in recent years, experiments and observations have pointed to evidence that we can only account for a surprising five percent of the universe.

Scientists believe that the remaining 95 percent is a mysterious dark matter and dark energy, revealing a universe far stranger and more wonderful than they ever suspected. The global particle physics community agrees that a precision machine – the proposed International Linear Collider – will answer these questions about what the universe is made of and provide exciting new insights into how it works. Using unprecedented technology, discoveries are within reach that could stretch our imagination with new forms of matter, new forces of nature, new dimensions of space and time and bring into focus Albert Einstein’s vision of an ultimate unified theory.

What is the International Linear Collider? 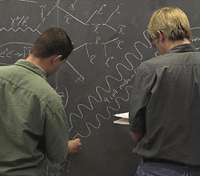 Physicists ponder the physics of the proposed International Linear Collider – a next generation particle accelerator that will explore some of the most fundamental questions about the universe.
Image: Fermilab

The International Linear Collider will give physicists a new cosmic doorway to explore energy regimes beyond the reach of today's accelerators. A proposed electron-positron collider, the ILC will complement the Large Hadron Collider, a proton-proton collider at the European Center for Nuclear Research (CERN) in Geneva, Switzerland, together unlocking some of the deepest mysteries in the universe. With LHC discoveries pointing the way, the ILC – a true precision machine – will provide the missing pieces of the puzzle.

Consisting of two linear accelerators that face each other, the ILC will hurl some 10 billion electrons and their anti-particles, positrons, toward each other at nearly the speed of light. Superconducting accelerator cavities operating at temperatures near absolute zero give the particles more and more energy until they smash in a blazing crossfire at the centre of the machine. Stretching approximately 31 kilometres in length, the beams collide 14,000 times every second at extremely high energies – 500 billion-electron-volts (GeV). Each spectacular collision creates an array of new particles that could answer some of the most fundamental questions of all time. The current baseline design allows for an upgrade to a 50-kilometres, 1 trillion-electron-volt (TeV) machine during the second stage of the project. There are also plans for a staged approach starting with a 250-GeV Higgs factory to study the properties of the particle discovered at the LHC in 2012 and then upgrading to 500 GeV.